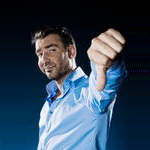 I wanna share with you a story that happened to me recently.

I was at a friend’s house. I knew him from around two years. He lived in a different city than mine, so we didn’t meet frequently.

We went out a few times. We always shared our thoughts and discoveries in Self Improvement witch we both are into.

But, recently, he moved to the city that I live in. He has very few friends here, so I was introducing him to people, showing him all the places he can go to and making sure he has a “great start” socially.

We go out, go into a club, it was just Thursday, so it wasn’t that full, not too loud, you could talk.

We go to sit down, they had one those bar counter-like tables, where you sit on stools and table is high. We were talking and the social chemistry was fine.

Right as we were ready to order, both of the guys were talking about what we’ll get and spotting other tables. They were standing too close to the girl and had their backs to her. Then she said “hey guys why don’t you sit down, so I can see you…” in a friendly lighthearted way.

As my friend’s friend started moving to take a seat, my friend started blabbering : “Hey, you don’t need to boss people to show how cool you are” in a professor-like tone of voice. (I thought : He only had TWO beers at home !)

As they started debating, I said “Come on man… she didn’t mean anything”. He turned to me and said “You’re taking her side? Why are you doing this?? You’re changing who you are just because a girl is around?!! How can you do this?”.

Disappointing Friends : The sooner you know, the better

We were shocked to say the least. Even his friend started giving him hard looks and saying how he should cool off.

I said “Why are you saying this man?”… I made a mental note : “I’ll deal with this later, I’m not gonna start feeling bad right now”.

The waiter came with a bottle of wine and we started drinking. We pretty much ignored the uncool dude and started talking and laughing.

After a few minutes, the guy hated the  situation and started saying “You’re not a man! How can you change yourself just because a girl is around!! She is not even that hot!!”

So I told him to go F himself and he said that he was leaving. His friend told us as he was getting up to join him : “What he said is sooo stupid, I’m sorry for that guys!” The girl said :  “I think he’s weird!! That’s nutts!! You don’t have to leave he’s the weird one. Really. We have a bottle, come and stay with us.”

The guy said “Alright, I’ll get him in a cab and come back”.

We were shocked!! But it wasn’t that bad, we had time, a bottle of wine and a calm club with good music.

After some blabber about how that guy was weird and that stuff came out of the blue, we enjoyed our night, talked danced, laughed.

Even his friend returned and joined us for the party. He was pretty shocked too.

…anyway. I had to get that story out of my chest.

MORAL OF THE STORY :

Can you completly “know” someone after two years of friendship?

Am I feeling bad about what happened?

Did we have a great time after the jerk left?

Am I gonna tell this to our mutual friends?

NO… Well, unless they ask why aren’t we friends anymore.

What am I gonna do about it?

Can a person that you value and introduce people to, betray you like this?

YES. That’s what happened to me.

Anyway, now you know that weird things can happen. Be ready and choose your friends wisely. 😉

Talk to you soon.

Learn the ONLY way to:

Get The eBook Risk Free

You'll Learn How To:

Get The Friends You Want eBook

Exclusive secrets and techniques for improving your social life.

Get the critical skills you need